This note is to reocrd the source code analysis of Dragonfly, which is the program that I participate during the 2020 summer as the remote internship. Thanks Alibaba for this great opportunity.

This blog (how to read source code?) helps me a lot from the perpective of theory of source code reading. While for the methodology, I will first locate the interested part of the source code, and then using githistory.xyz tool to keep track of the code from the very beginning of the development. With the help of the githistory.xyz, I could find the associated code together with the part that I’m focused on by looking at every commit of the file.

This section includes my understanding of the entire Dragonfly framework.

And that’s all about the downloader. After the Dragonfly has successfully download the piece and push it to the writer queue, the pieceWriter will start to write the piece to the local disk and the target file.

Note that the two files are different: the first one is to be sure located in the local file system, while for the later one, it may reside in the cluod disk, or another disk in local disk. Actually, there are two writers which corresponds to them: client_writer and target_writer. In this case, the writing process would be the network IO, and that will be the bottleneck of the whole system.

As mentioned in the #1164, the current download process would be a defect if the Dragonfly client is running on a cloud disk: the local file system is not the target place, and the downloader would have to write the file one more time to another file system. This is kind of like the sendfile function.

Remove the redundency of writing the file to the local file system. Directly upload the data to the target place by storing the data in memory as the sliding window in TCP protocol. Please look at #1164 to get more information about the great idea. 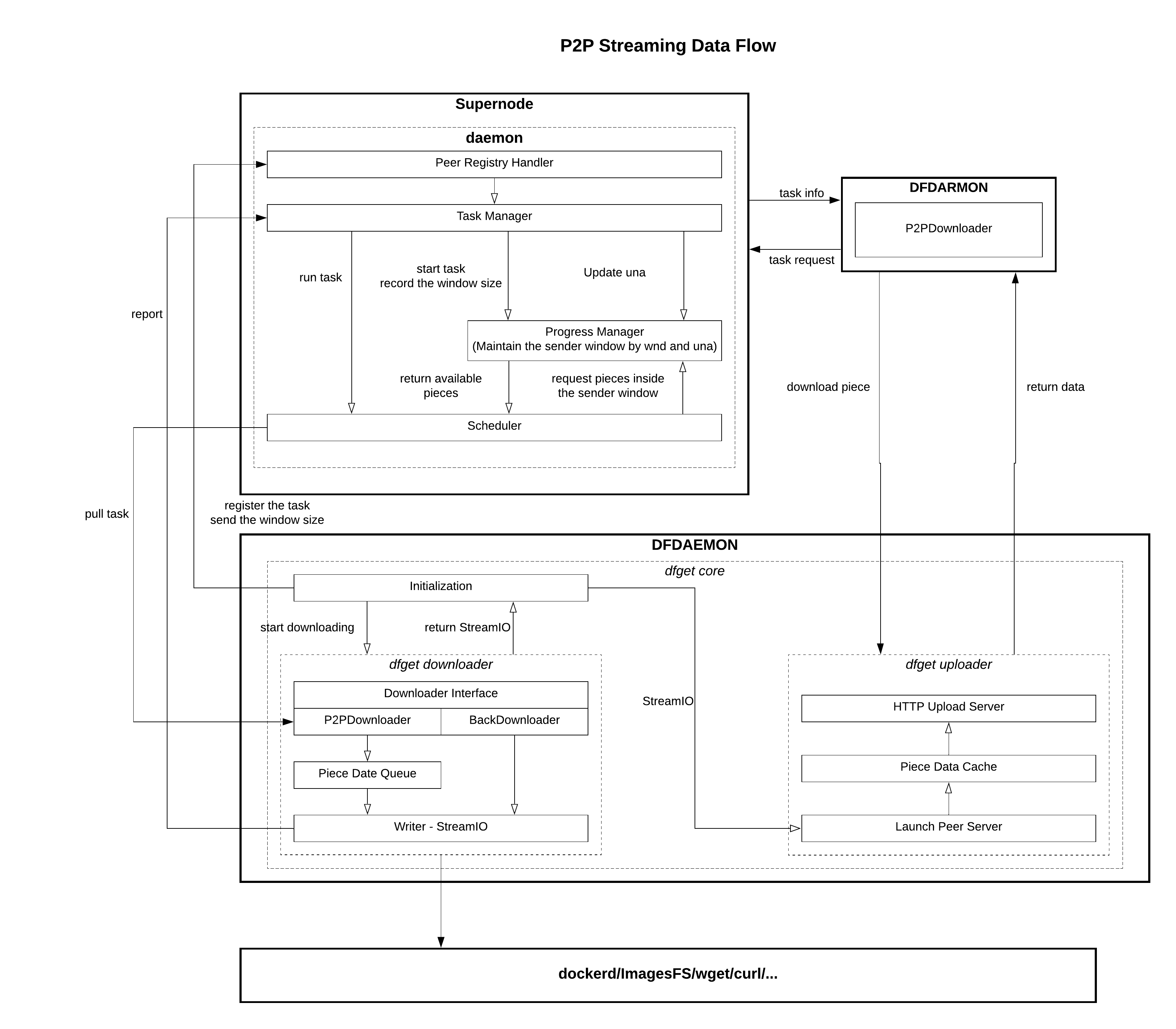 Any recommendations and comments are welcome! Thank you.

This section includes my understanding of the part associated with the ASoC program. There will be a lot of details compared to the Overrall section.

Based on the upon reasons, the cache must be included in the peer server struct. What’s more, the communication between the downloader and the uploader, should be finished by HTTP request.

fill out the API frame work, create the interface

While the clientState not only maintains the piece status of CID, but also the runningPiece, which means the pieces that are currently downloaded from desCID to srcCID.

This PR is part of the work proposed in #1436, which implement the P2P stream mode in supernode side. To summarize the work, the streaming download in supernode could be cateloged into two sections.

Discussion with Developer from Ant

Client ID is defined in the apis/types/df_get_task.go#DfGetTask struct. And it is generated during the dfget/core/core.go#prepare method with the structure rv.LocalIP-cfg.Sign.

Inside the registry method, the peer instance in supernode is created, where the peerID is created for supernode to index peer server. What’s more, the task is added or updated after the creation of peer instance.

will be called to create the files, queues, and targetWriter. And then the Run() method of the PieceWriter is ran in the go routine.

Inside the method, the main body of the function will loop forever until all pieces of the file is downloaded successfully. And those successfully downloaded pieces will be put from the ClientWriter.clientQueue to clientWriter.targetWriter.targetQueue, and the clientWriter.serviceFile. What’s more, in the Run() method of ClientWriter, another new go routine is created to run the Run() method of targetWriter, which will wirte the same content in the targetQueue. (Why is the value type not a pointer?)

There are three patterns currently in the Dragonfly, which are source, p2p and cdn. We can find the entrance of the downloading process in the Start() function, which is the downloadFile() function. And I will mainly focus on the p2p downloading pattern.

SupernodeLocator defines the way how to get available supernodes for clients.

The locator will be initializaed in the dfget/core/register process. From the configuration file, every super node is associated with a weight, which will be parsed in the static locator. After that, the regist.NewSupernodeRegister() method will be called to connect to the supernode. Inside this method, the way of decouple the locator and the registor is very subtle: the registor could directly call the Get() method and Next() method without the necessarity to concern about the detail of the locator.

Sometimes structs are used only for the collection of methods. In this case, the empty struct with a lot of API could be used as the API variable. For example, in the dfget/core/api/download_api.go file, the downloadAPI is used to conveniently aggregrate a set of downloading related methods. And this struct could be passed to other function as one parameter.

And those API structs have the HTTP request method to send datagram and get the response.

The interface is exposed into the outside, but not the concrete instance. The concrete struct is encapsulated in the package, and the user can only communcate with the the methods defined in interface.

In this way, the framework is very easy to be modified, and the decouple has been achieved between the method implementer and the user.

Reuse the code for different branches

I was going to seperate the stream upadloing branch and regular uploading branch apart in the uploadHandler() of df/get/core/uploader/peer_server.go file. But my mentor hints me that, it would be better to add another interface to do the job. In this way, the current code would not be effected at all, while the actual action of the uploader would differ.

That’s really a good lesson on resuing the current code.

The scheduler core function decouples the the piece fetch process in progress manager and the scheduler by passing the control parameter. This is called the control couple.

I was assigned this issue as the first step for the ASoC to familiar myself with Dragonfly community. But it turns out that this feature is impossible to implement. Check my post to get more information.

So in this step, I know that it is impossible to implement the feature in two ways: one is to modify the type of limit reader, the other is to move the sendFile handler from system library to user space.

But I was getting shy on talking about my results. For one thing, I didn’t directly comment my thoughts under the issue, rather I first went to the DingTalk to share it with mentor. This is not right. For another, I didn’t describe all my thoughts clear. Even if the other way is not impossible to implement, I should talk it aloud to prove that I worked on this.

So we beat on, boats against the current, borne back ceaselessly into the past.